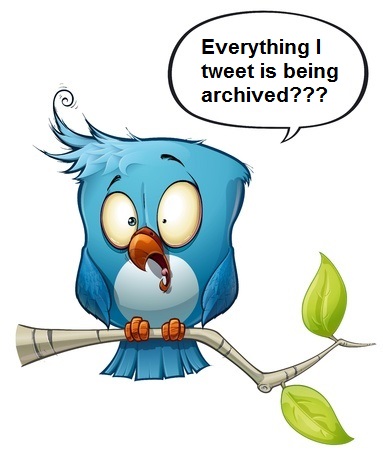 For years, anyone that wants to has had the ability to view the full text of each blurb, chirp, idle chit-chat, light banter, cheap joke, or whatever such term applies to public tweets on Twitter. This latest variation on relatively novel social themes is highly touted as having benefits and consequences depending on your point of view.  As always, though, it’s great to know what’s going on with any new sociopolitical revolution.

Below is a brief lowdown that gives the real scoop about an unusual deal struck between Twitter and the U.S. Government’s Library of Congress (LOC) that gives anyone free access to the public tweets made by users on the social media site.

LOC Communications Director Gayle Osterberg was quoted as having noted:

“As society turns to social media [for] … primary … communication and creative expression, social media is [sic] supplementing, and … supplanting, letters, journals, … and other sources routinely collected by research libraries.”

Well, folks, that full disclosure must be just what it speaks volumes for.  The LOC clearly believes that Twitter is essentially replacing typical physical media and as such it should be archived and stored in a collection that is available to the general public just like any other historical records would be.

Since its first launch, Twitter has grown phenomenally in size and popularity with its globalized audience reported to comprise more than 284 million faithful members by late 2014.  That gigantic loyal fan base reportedly generates in excess of 500 million tweets daily.  Due to a maximum length of 140 characters for each plain-text message, data that tweets contain is easily processed and stored.  Thus, the archive is highly-touted to provide a wide cross-section of raw material for researchers wanting to tap the Internet’s zeitgeist or even far beyond that zenith.

One recent academic research publication reported that well over 380 other different publications on disciplines that range from IT, science, economics, sociology, and humanities reside deep within the social media site’s content.  This immense diversity purportedly gives researchers access to gain new insights with corresponding breadth and depth.

As most probably guessed, the main point of contention over Twitter’s archival regards privacy concerns.  Shortly after LOC announced its then new launch in 2010, a slew of harsh criticism ensued via comments posted on its official website.  Most reflected a sense of betrayal by former and current beloved Twitter fans.  Three consistent themes that quickly emerged were a lack of prior notice, consent or personal control.  People naturally resented public exposure of every tweet they ever made without advance disclosure.

LOC replied by providing a lengthy partial recitation of some of the fine-print language in Twitter’s standard Terms and Conditions.  The gist of its defense consists of two legal theories:  1) Mere republication of data that already existed and voluntarily posted for public access, and 2) Prior ‘constructive’ notice and consent by users who agreed to T&Cs at initial signup.

Just one vehement dissent of too many to cite herein was a scholarly researcher who noted that although the ‘already public’ argument is technically true, it presumes a purely illusory strict dividing line between public and private data. Per this prestigious source, the fatal logical flaw lies in failure to consider contextual factors.  A second equally acclaimed source aptly opined that absent express prior consent deprived Twitter users of any opportunity to guide initial release or realistic expectations of how information conveyed via tweets will truly flow.

Like any other digitized collection, LOC must process, organize and index all archived Twitter data to enable access and meaningful usage.  In fact, by LOC’s own explicit admission, the archive is a very novel collection type.  Besides its enormous size, its dimensions expand with rapid velocity on a daily basis.  Yet another cited complicating factor is enormous substantive variety of content featured via tweets.  Moreover, each 140-character tweet may have more than 100 unique metadata tags for embedded links, visual illustrations and shortened URLs, etc.

For these reasons alone, public access to Twitter’s Archive remains in limbo.  Great technical challenges might well provide a perfect means of escape for social mediaphytes with no desire for their entire life story to be published in full glory for all to see forevermore in harsh, unforgiving virtual spotlights.